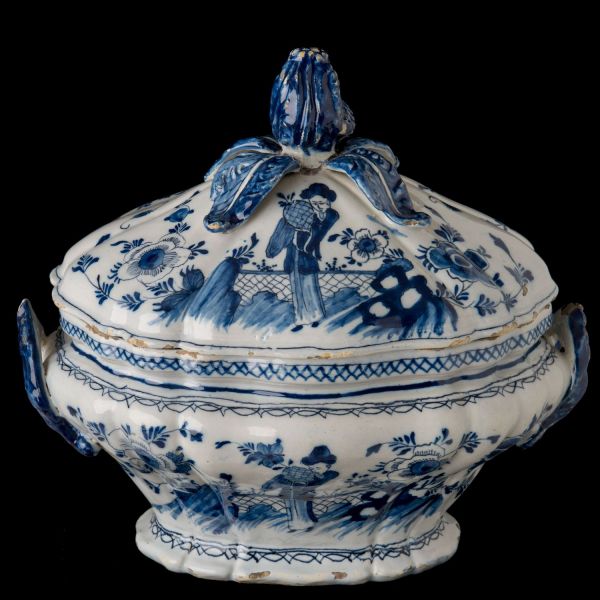 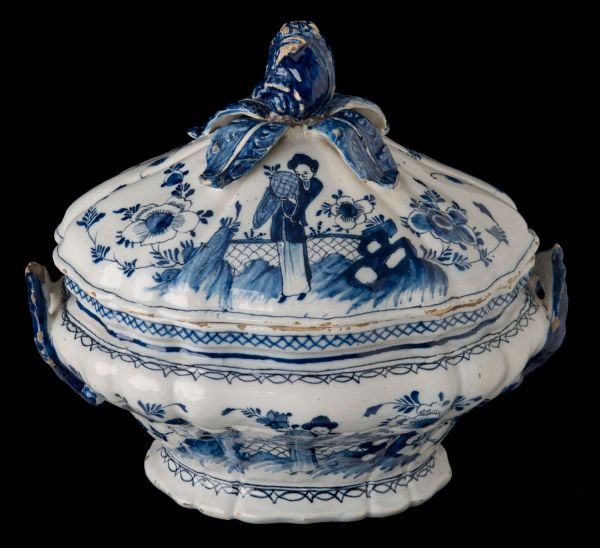 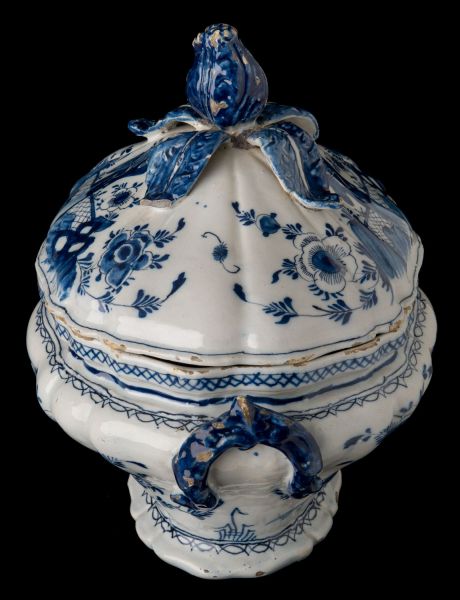 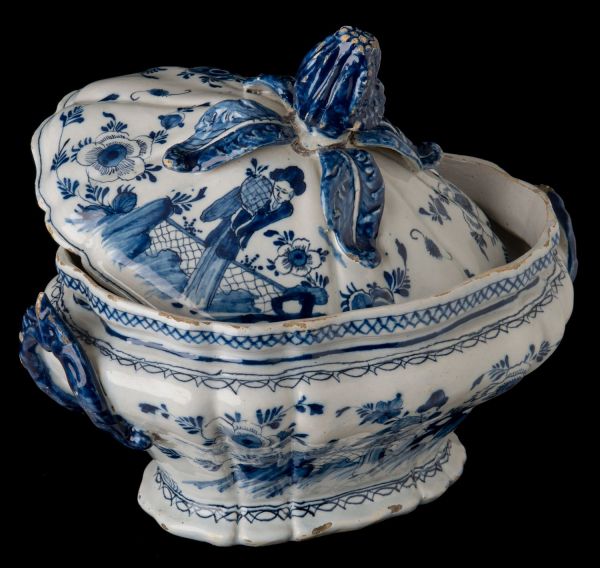 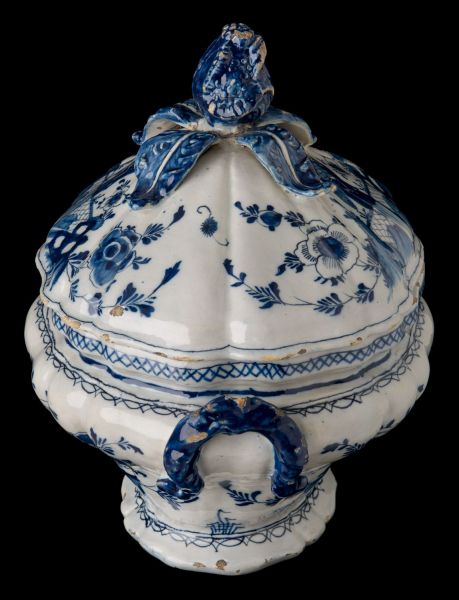 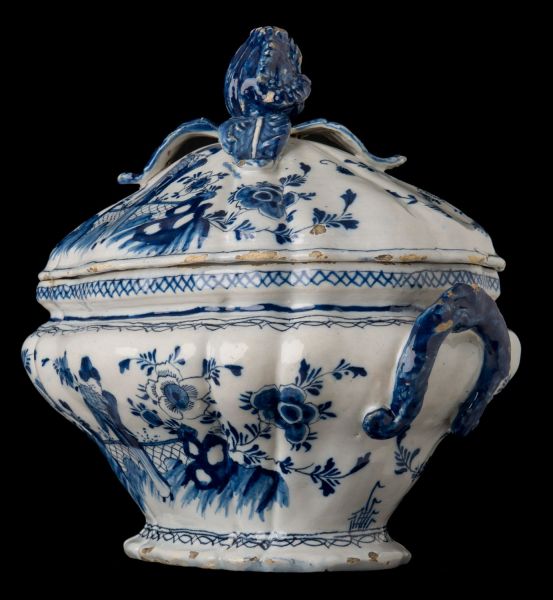 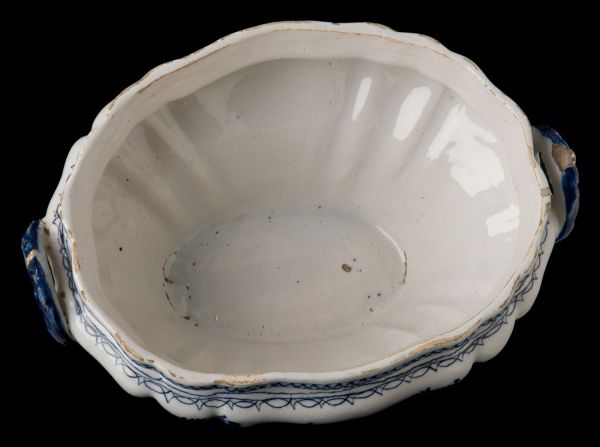 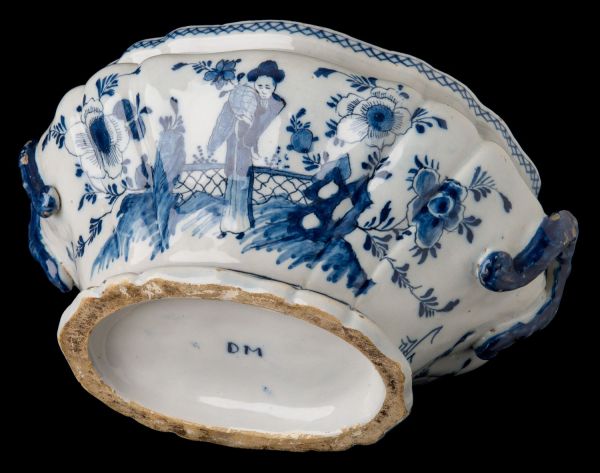 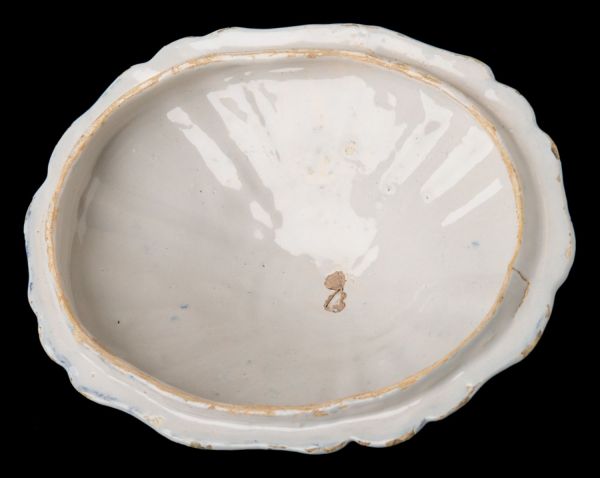 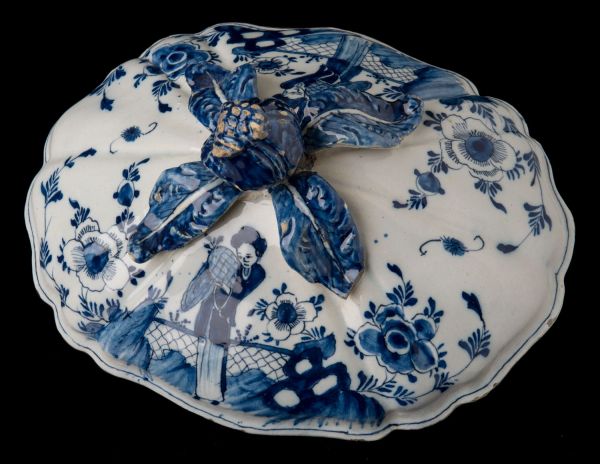 The blue and white oval-shaped tureen has a curved body on a spreading foot and two blue-coloured foliate loop handles. The knob on the cover is modelled as a flower with four leaves. The tureen and cover are painted on either side with a Chinese lady in a garden-like landscape with rocks and flowers. She holds a flowerpot in her arms and stands in front of a low fence. The depictions on the tureen are horizontally  framed by bands of diamond and oval-shaped ornaments. Another band with diamond-shaped ornaments is applied just under the rim. The DM signature has not yet been identified.

Similar examples
A smaller, similar tureen with a polychrome floral decor is illustrated in Aronson (p. 59). A larger example with the same flower-shaped knob with four leaves on the cover is in the collection of the National Museum of Ceramics in Sèvres, France (Lahaussois 1998, pp. 176-177, nr. 163). It was made in the Porcelain Axe pottery.

Explanatory note
Only a few dinner services are known, of which the earliest is the one made by the Metal Pot pottery for Wenzel Ferdinand prince Lobkowicz circa 1685 (Eliëns, pp. 53-54). Others are known from the Greek A and White Star potteries. In about 1780 this last factory manufactured a large service for the Spanish Cardinal Antonio Despuig y Dameto, decorated with the Despuig family’s coat-of-arms (Christie’s 2002, pp. 140-144, lot 444). Customers could perhaps put together a dinner service themselves by combining different shapes with popular decors, made by multiple potteries. An example of this is a composite service with the panier fleuri decor that was auctioned at Christie’s Amsterdam in 2001 (pp. 96-97, lot nrs. 392-406).   A service could also have been assembled with the blue and white decor of a dragon on a dense ground of flowers and foliage. This popular decor was painted on different Delftware shapes, including dishes and tureens. Undoubtedly  many dinner services were made in Delft, but have been scattered or even lost in the course of time. There was a substantial and varied production of tureens in the second and third quarter of the eighteenth century, which were probably also sold separately. The purchase of a complete service was expensive which few could afford, and by selling tureens separately the demand for parts of a service was met.