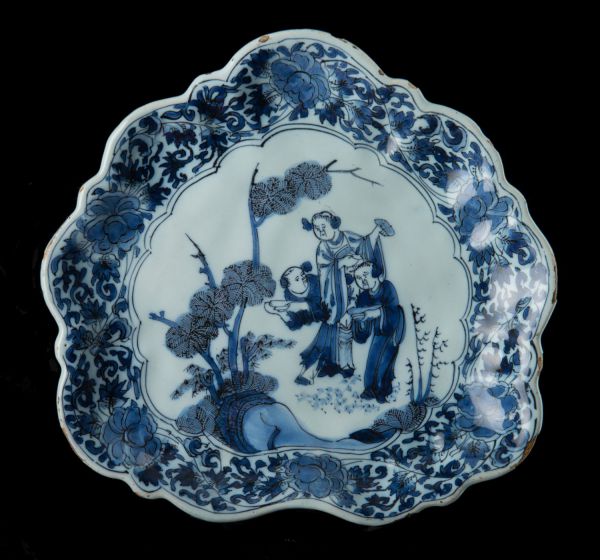 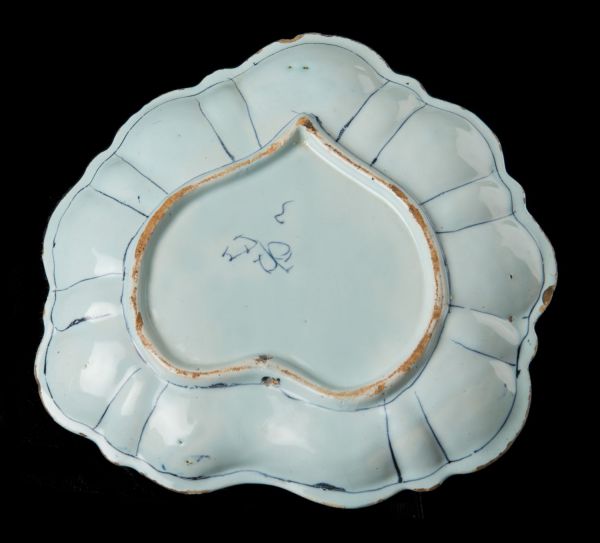 Leaf-shaped dish, part of a sweetmeat set, with a profiled, convex rim painted in blue with a chinoiserie decor. A Chinese lady stands with her two attendants near some trees at the waterside. The attendants carry dishes, the lady holds a fan, they are about to make a sacrifice. The depiction is framed in a double line. The border is painted with a continuous frieze of flowers, leafy twigs and scrolls. The back is decorated with eight pairs of double  lines.

Similar examples
Two slightly larger heart-shaped dishes with chinoiserie decors, SVE-marked for the Greek A, are depicted in Lunsingh Scheurleer (p. 207, nr. 74). The Rijksmuseum in Amsterdam possesses two SVE-marked dishes with chinoiserie decors (BK-NM-1978-34AB). Chinese pseudo-characters are applied in the border. A complete SVE-marked nine-part sweetmeat set with an Oriental floral decor is in the Museum of Fine Art in Boston, USA (inventory number 2012.576).

Explanatory note
Chinoiserie decors in blue or blue and purple were the most painted decorations during the eight-year production period of Samuel van Eenhoorn. They were painted on a wide range of objects, including sweetmeat sets. Judging from the large number of surviving dishes and some complete sets, their production must have been considerable.  The pottery had multiple shapes and models in their assortment. Surviving complete sweetmeat sets are extremely rare. Sets were used to present sweetmeats, dried, sugared or wet fruits.