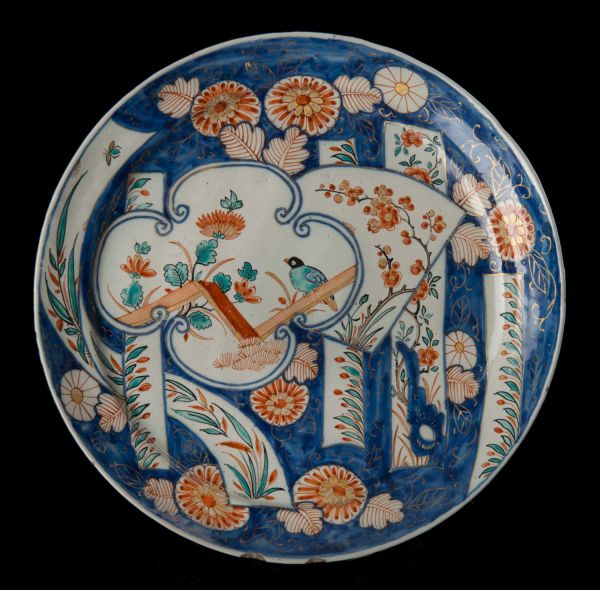 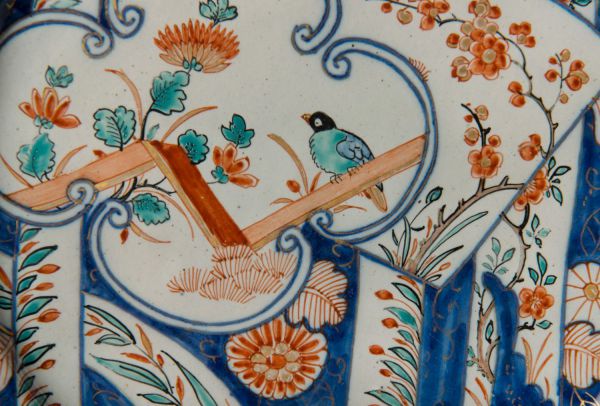 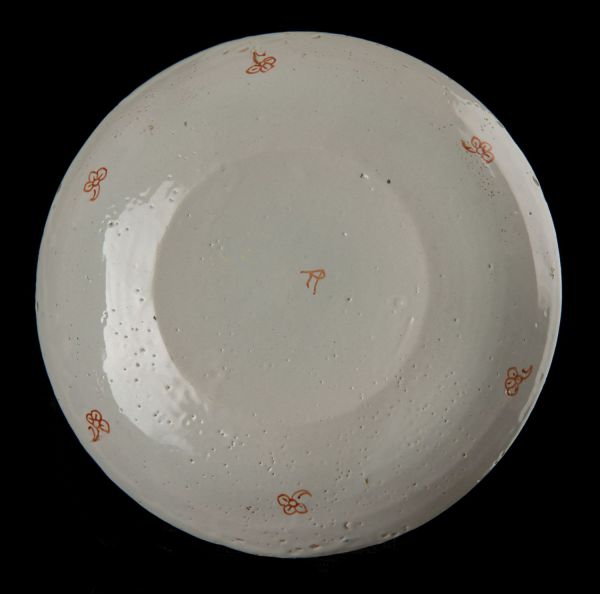 Plate without a foot rim, painted with a polychrome, asymmetrical Japanese Imari-decor. Multiple small panels are reserved on a blue ground, each filled with flowers and foliage. These panels are overlaid by a fan-shaped cartouche with prunus branches and by a quatrefoil with flowers and a bird on a fence. The blue ground is decorated abundantly with chrysanthemums and leaves, which are either reserved and painted in red or in gold on the blue ground. The back of the border is painted in red with six floral branches. Plates without a foot rim are called pannenkoeken (pancakes) in Dutch.

Similar examples
A similar plate is in the collection of the Haags Gemeentemuseum (The Hague Municipal Museum) and is depicted in Eliëns (p. 136, nr. 43). The quatrefoil contains a dragon amidst plants behind a fence. Three other similar plates with a flowering branch in the quatrefoil are in Aronson 2015 (p. 71, nr. 39).

Explanatory note
In 1713 Adriaan or Ary van Rijsselbergh (1689?-1735), together with three others, was employed as a gold painter by the widow Johanna Kocx - Van der Heul, owner of The Greek A pottery in Delft (Eliëns, p. 69). A gold painter was a specialist in painting petit feu decors in the Japanese Imari and Kakiemon styles. There was a huge demand for these porcelain types which were copied on a large scale in Europe. In the Dutch republic The Greek A was the most prominent manufacturer of Imari and Kakiemon decors. The pottery excelled in this production, not least thanks to the input of the hired gold painters.
The contract that Van Rijsselbergh signed with the widow in 1713, remained valid as long as Johanna van der Heul remained owner of The Greek A pottery. She sold the pottery in 1722 to Jacob van der Kool. Whether this contract was terminated or extended, is not known. Perhaps the success of this gold-painted pottery encouraged Van Rijsselbergh to paint on his own account, or he was allowed to work partly for himself. His estate inventory, drawn up in 1735, shows that he possessed in his basement, besides Delftware, large quantities of the same kind of Asian porcelain (Eliëns, p. 133 and 136). It is very likely that he had a petit feu kiln at home in which he fired pieces he had painted.