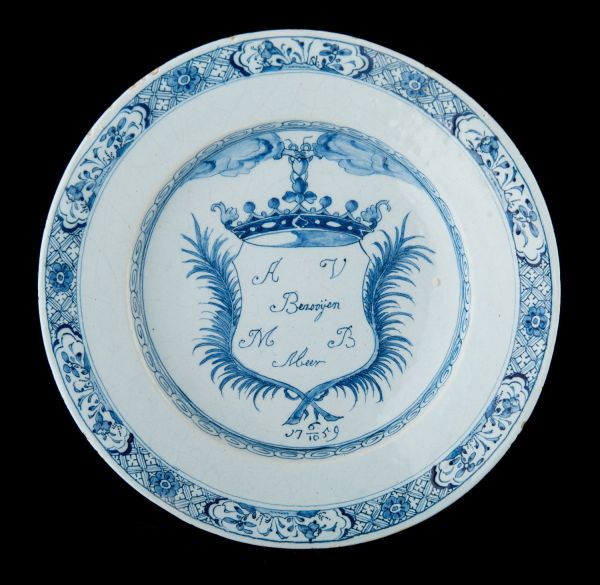 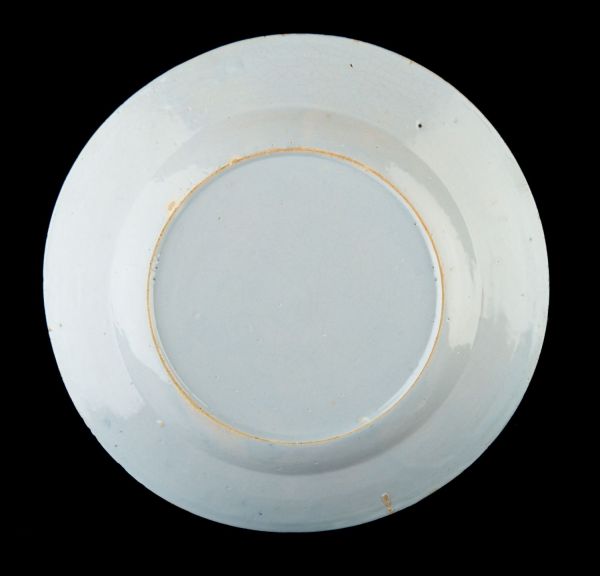 The marriage plate is painted in blue with a crowned shield between two laurel wreaths. The shield is suspended from a heart held by two hands emerging from clouds on either side. The names of the newly-weds A.V. Bezooijen en M.B. Abeer are mentioned on it, and underneath is the date of the wedding: October 6th 1759. The well is painted with a meander motif, the border with a small band of six cartouches filled with landscapes and separated from one another by trellis-work.

Explanatory note
Marriage was and is a special and joyful occasion in life and presenting gifts by relatives and other guests was part of it. Delftware objects made as a commemoration of the wedding were a suitable present. It was also possible that a married couple ordered such items themselves in Delft. Wedding anniversaries were commemorated on plates too. Such a plate was made in 1760 for the copper anniversary (12 and a half years) of the Calvinist minister Ds. Petrus Steensma and his wife Huberta van Harinxma (Klijn, p. 115). The couple lived in Nes on the island of Ameland. The Delftware potteries had presumably standard designs for marriage plates in their repertoire.
In 1762 a plate was made by the Fortune pottery for the wedding of Alle Bt Tichelaar en Aaltje van Delden (Van Geenen, p. 126, nr. 11.22). The inscription was painted in a square cartouche, surrounded by flower vases and floral decorations in the border. Seven years later this pottery used the same design again, this time for the wedding of Abraham Izak Hulshoff and Martje Beerents (Scholten & Jörg, p. 26, nr. 41). It was easy to adjust the decor on this plate for a new customer, but so far no other examples are known.
If the spouses had coats-of-arms, they were often applied on Delftware, as with the wedding of Petrus Poortermans and Cornelia van der Meer in 1757 (Van Boheemen et al, p. 123). Besides plates these designs were painted on plaques as well, as can be seen on a polychrome example from the third quarter of the eighteenth century, which was auctioned in Amsterdam (Sotheby’s 1990, p. 26, lot 51).
Interlocking hands emerging from clouds and holding a heart are a well-known decorative motif on marriage plates (Van Geenen, p. 126, nrs.11.18 and 11.20). They are symbols of divine blessings on Christian marriage. A poem emphasizing this divine approval was added to a Delftware charger from 1789, painted with these symbols (Van Dam, pp. 146-147). At the same time it is a memento mori, a reminder of the temporality of human existence.