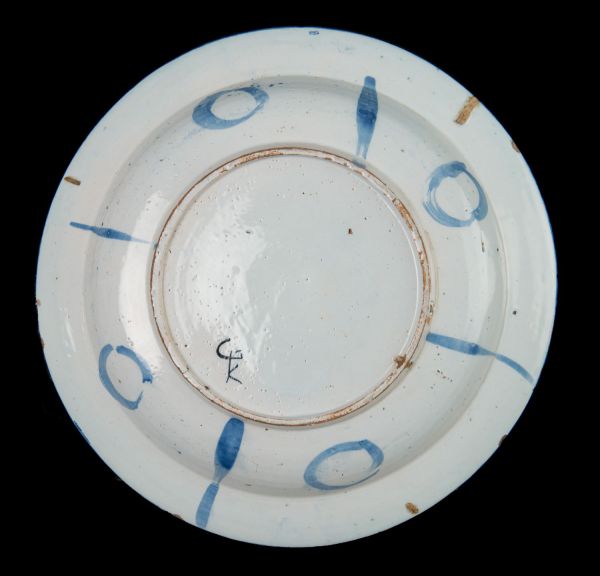 The dish is painted in the center with a water landscape in lavender blue within bluish black outlining. Two ducks are flying over flowering plants issuing from rocks that emerge from the water. The well and flange are decorated with oval cartouches alternating with stylized flowers and leaves. Each cartouche is filled with a flower on a scrollwork ground. The back is painted with four radial lines, alternated with four O-shaped elements. The mark is painted in bluish black.

Similar examples
A dish of 30 cm with almost the same decoration is in the Victoria and Albert Museum in London (inventory number 2376-1910). This item is also marked GK and is published in Fourest (p. 88, fig. 76). A large covered jar in the Museum of Applied Arts in Frankfurt (inventory number 12182) and depicted in Bauer (p. 59) is decorated with three flower vases filled with exuberant flower bouquets and may have been made by the same pottery. Especially the flower motifs depicted on the flower vases are very similar to the ones that we see on the rocks. This covered jar belongs to a group of Dutch Delftware previously incorrectly attributed to Frankfurt.

Explanatory note
Water landscapes are frequently used as motif on Chinese porcelain from the sixteenth century onwards. The painted water landscape on this Delft dish reveals the most similarities with porcelain of the last two Ming emperors, Tianqi (1621-1627) and Chongzhen (1628-1644). For example the flying bird painted on a square bottle from the Tianqi period, pictured in Steven Little (p. 42), is the same as the Delft imitation. Other examples from the Chongzhen-period are a pair of plates and a square dish in the collection of Michael Butler (Butler, pp. 33, 35, 61).