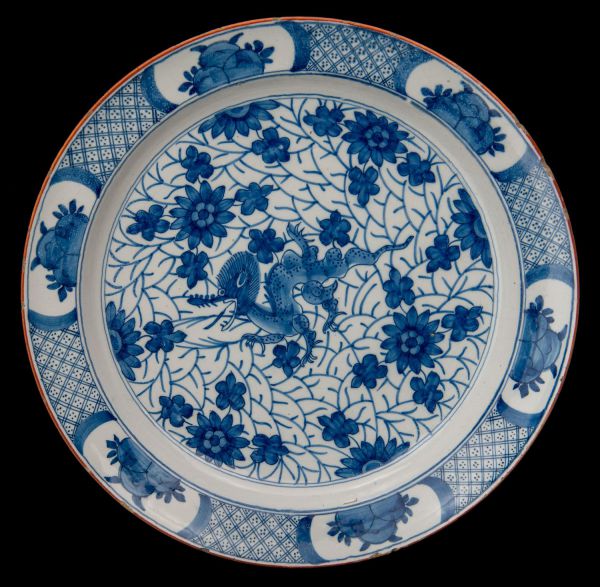 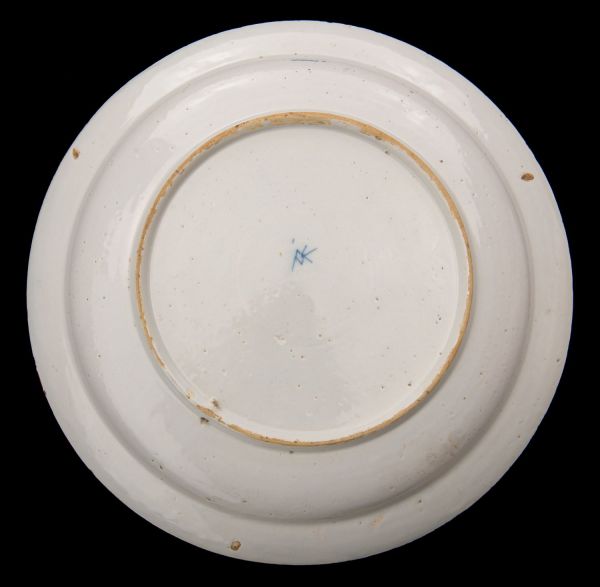 Dish with blue and white decoration of a dragon on a dense ground of flowers and foliage. The well is undecorated. The border is painted with six cartouches, each filled with three peaches each and separated from one another by trellis-work.

Similar examples
There are several plates and dishes with this decoration bearing the AIK mark for Jacob van der Kool. Two are in the Glaisher collection in the Fitzwilliam Museum in Cambridge (Rackham, p. 315). Other pieces are in the Museum of Applied Art in Cologne (Tietzel, p. 16, fig. 49) and the Groninger Museum (Scholten & Jörg, p. 22). A ribbed teapot with this decoration and AIK mark was sold in 2011 at Christie's in Amsterdam.

Explanatory note
Judging from the large number of surviving pieces, this decoration must have enjoyed considerable popularity in the eighteenth century. It is used on teapots, salts, vases, pots, bowls, tea caddies, beer jugs, spittoons, oil and vinegar sets, puzzle jugs and even egg cups. Customers could perhaps put together a service themselves by combining different shapes with this decoration.
The border with cartouches and trellis-work is copied directly from Chinese porcelain plates and bowls of the Kangxi period (1662-1722). However the center decoration has no direct parallel from the Kangxi period. Dragons or other animals on a dense ground of flowers and foliage were painted on Chinese porcelain as early as the sixteenth century, and such a decoration probably served as  model for this Delft design. The dragon decoration was most likely developed at The Greek A pottery. The earliest pieces known are two pots and a vase with the AK mark for Adriaen Kocxs (1686-1701). They are in the collections of the Victoria & Albert Museum (inventory number C2371-1910), the Museum Lambert van Meerten in Delft and the Museum Arnhem (AB 8927). Other early pieces are three tea caddies with the LVE mark for Lambertus van Eenhoorn (1691-1721) of the Metaale Pot (Museum Arnhem, inventory number AB 8332, Aronson 2004, p. 46, no. 47). Many pieces are marked with a D, often combined with a number. This mark cannot be attributed to a pottery with certainty.

B. Rackham, Catalogue of the Glaisher collection of pottery and porcelain in the Fitzwilliam Museum Cambridge, two parts, Cambridge 1935 (reprint 1987)