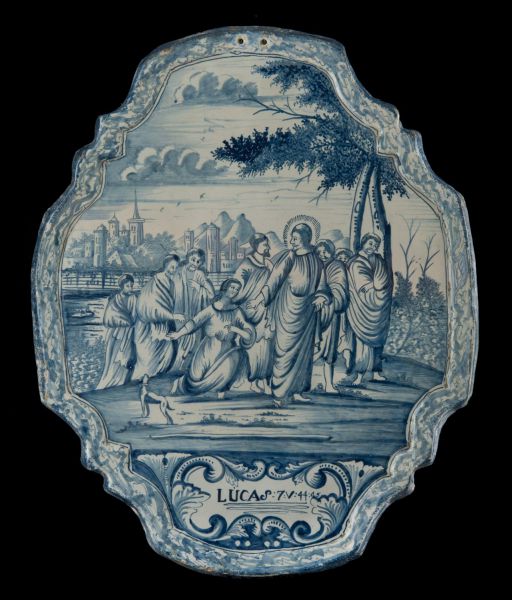 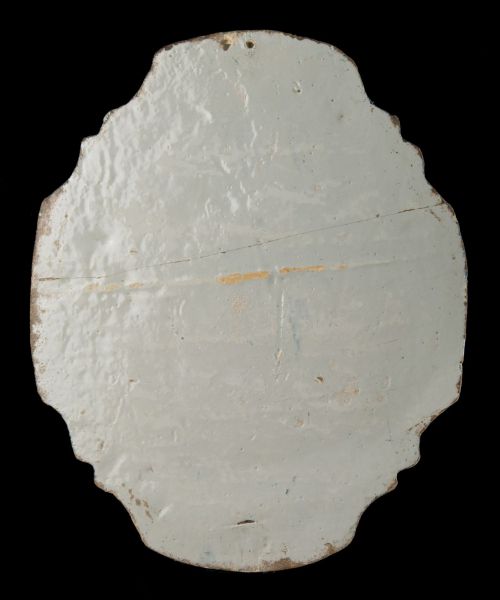 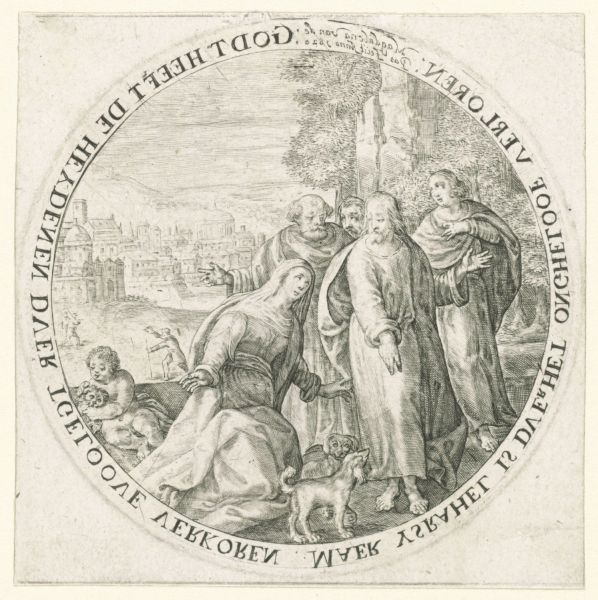 The blue and white oval plaque has a scalloped, molded and raised marbled rim. It is painted with the biblical theme of Jesus healing the woman with an issue of blood. The depiction shows a great similarity with a print from 1620 by the Utrecht artist Magdalena van der Passe. The overall design is basically the same: a group in the foreground, closed off by some trees to the right and a small town in the background. The plaque is not round, as the print is, and by adding persons to the group the depiction is more balanced. On the plaque the woman and Jesus are positioned more towards the viewer which also alters the position of their arms. A scroll-bordered cartouche is reserved at the bottom, containing the bible reference Luke 7: 44 - 45. The tile painter made a mistake with this reference, it should be Luke 8 instead of 7.

Similar examples
So far only one other item of Frisian pottery is known with this biblical theme. It is a 1753-dated plaque, also from the Tichelaar pottery, painted by Gatse Sytses after a different graphic example. This plaque used to be in the collection of the Harlinger Pottery Museum (Van den Akker, p. 247, nr. 0261101).

Explanatory note
Douwe Klases Hofstra (1767-1815) was first painter of the Tichelaar pottery between 1796 till 1813. He succeeded Gatse Sytses who was first painter for more than thirty years. Hofstra was a trainee of Sytses and worked in the pottery from 1783. Of his massive output as first painter only about 170 items are known, half of them are more refined faience, such as plates, plaques, colanders, covered tureens, chafing dishes, baskets, shaving basins, trays and pots and jars. The other half are tiles, tile pictures and majolica chargers.

The print Jesus healing the woman with an issue of blood by Magdalena van der Passe from 1620 is in the collection of the Rijksmuseum Amsterdam, inventory number RP-P-1965-156.