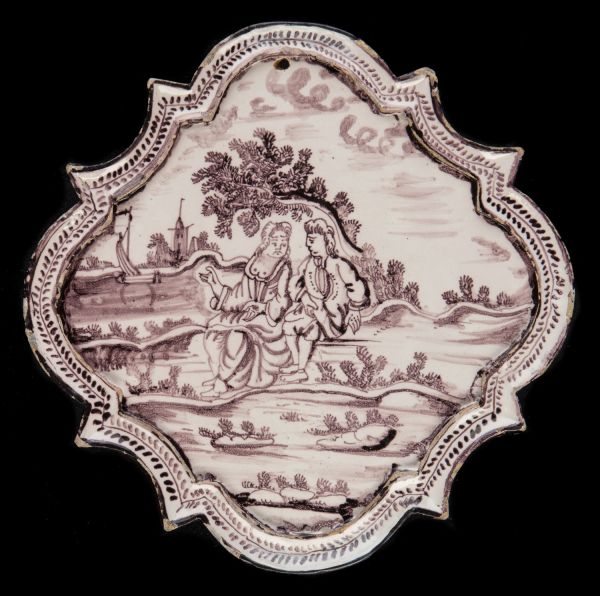 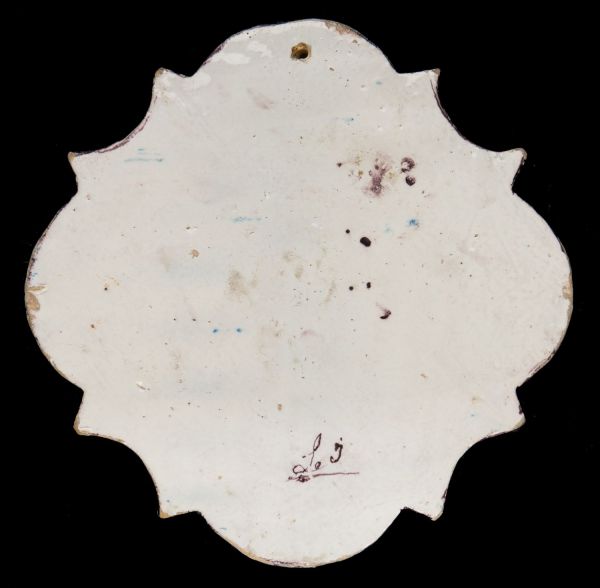 Purple and white plaque with figures in a landscape

Lozenge-shaped purple and white plaque with a conversing couple in a landscape. In the foreground a man and a women with a bare bosom sit on a river bank, behind them stands a tree leaning to the left. A church tower and some houses are depicted on the other bank and a boat sails on the water. The molded and raised rim is painted with a continuous branch of leaves, the back is glazed white. The woman with bare bosom shows that a pastoral scene is depicted. The man and woman are possibly shepherds, although their characteristic staff and sheep are lacking. Pastoral literature enjoyed considerable popularity in the seventeenth and eighteenth centuries and themes from it were frequently used for paintings, drawings and prints. The painter must have taken such a print as a model. The Le J signature is probably of the tile painter and has not yet been identified.

Explanatory note
Besides the mass production of tiles, the tile factories in Utrecht in the eighteenth and the first half of the nineteenth centuries also manufactured other items on a small scale such as plaques, tobacco boxes, tea-stoves and shoes. Plaques form the largest part of this incidental production, and can clearly be distinguished stylistically and technically from Delft examples. Stylistically they are related more to tiles from Utrecht. The layered structure of the foreground with rocks and low shrubbery is derived from tiles with landscape, shepherd and biblical decors. The same also applies to the (leaning) tree, a typical Utrecht feature. The spiral cloud motifs are painted on Utrecht tiles as well. There are also important differences in production techniques. Delft plaques are molded in plaster molds and fired on pins in saggars. The plaques from Utrecht were not fired in saggars, but standing on their side on two small clay cylinders between rows of tiles. The back of the plaques leaned against the tiles. This method of production leaves different marks on the Utrecht plaques from the pin marks on Delft plaques and these are important keys to establish Delft from non-Delft production. Using molds enables a Delftware pottery to produce the same shape repeatedly, up to dozens or even hundreds of times, depending on how long the molds could be used. The Utrecht plaques are all handmade and can therefore be considered as incidental products instead of items regularly produced.