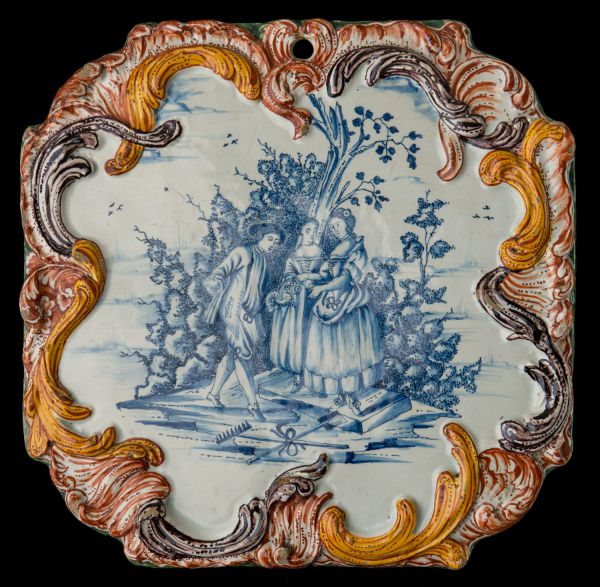 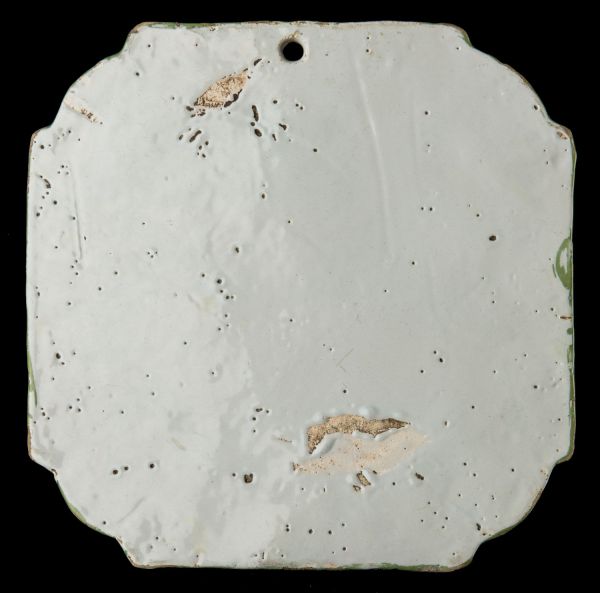 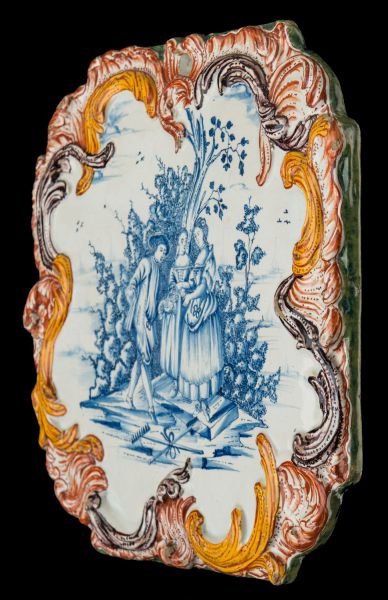 Plaque with a courteous scene

The octagonal plaque is painted in blue with a courteous scene. A young man offers a flower to a young lady accompanied by her chaperon, against a background of trees and shrubbery. On the foreground lie a rake and a shovel in cross shape, tied with a ribbon. The courteous scene depicts either an allegorical representation of ‘Earth’ from the series of the Four Elements or ‘Spring’ from the Four Seasons. The blue painting is framed within a polychrome, relief molded rococo border, made up of leaf-shaped C and S scrolls. The top with a hole for suspension, the reverse is glazed.

Condition: wear to the molded rim, the plaque is a little convex.

Similar examples
Almost the same decor is painted on a rectangular blue and white plaque, depicted in Aronson 2008/2009 (p. 75). A pair of similar plaques with the three main figures of the courteous scene against a different landscape background was sold in 2012 at Christie’s Amsterdam (sale 3001, p. 45, lot 100). Two others with respectively a gallant scene and a landscape in blue in a polychrome border were in the collection of mrs. Doodeheefver-Toonen (Christie’s, sale 2647, p. 98, lot 680 and p. 99, lot 682). Another with a biblical scene was auctioned in 2005 (Christie’s, sale 2656, p. 26, lot 97). and a manganese colored biblical story within a monochrome blue border in 2004 (Christie’s, sale 262, pp. 24-25, lot 107). A pair of plaques with polychrome flower vases and baskets on cartouches were in 2015 in the Aronson collection (pp. 82-83, nr. 46). A similar kind of plaque with a diagonal situated (overhoeks) suspension hole, is depicted in The Lavino collection (p. 53, picture bottom left).

Explanatory note
Plaques and dishes with blue painted scenes in polychrome frames were popular between 1740 and 1780. The frames are in French Régence or Rococo styles and can be executed with abundant ornamentation. Gallant or courteous scenes are, together with landscapes and biblical themes, the most painted decorations. In many cases gallant scenes are based on graphical examples, such as from the German designer and printmaker Johann Esaias Nilson (1721-1788). Frequently they depict allegories like the Twelve Months, the Four Seasons, the Four Elements or the Five Senses. Of this plaque the exact graphical example has not been found. Aronson, who had a plaque with the same decor in his collection, assumes that it is based on the depiction of ‘Earth’ from a series of the Four Elements by F. Cattini after Jacopo Amigoni (1682-1752), published by Joseph Wagner in Venice (Aronson 2008/2009, p. 75). The positioning of the figures on this print deviates from the ones on the plaque. Therefore it is very well possible that this decor is based on a different print.