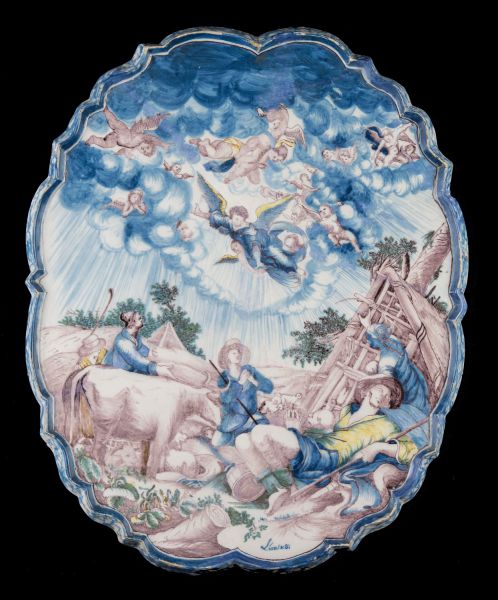 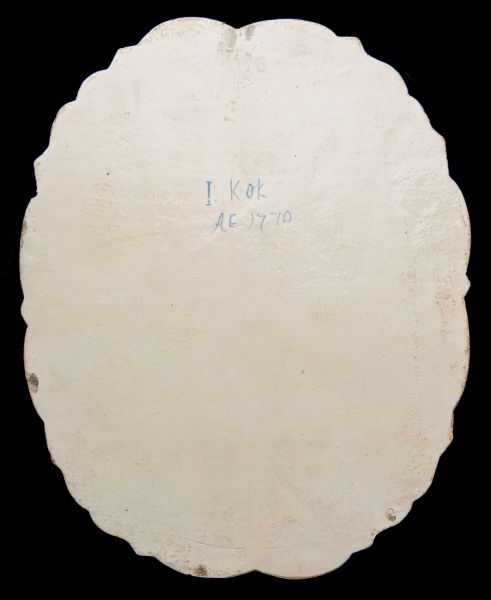 Polychrome plaque with the Angel’s Announcement to the Shepherds

The large plaque has a scalloped and raised rim and is painted in polychrome with the biblical story of the Angel’s Announcement to the Shepherds. The painting is executed mainly in purple and blue complemented with green and yellow accents. In the foreground the bible book reference ‘Lucàs2:8’ is painted in blue. The inner rim is painted in blue; the outside is blue marbled.
The picture is based on print number 8 from the New Testament series Toneel ofte Vertooch der Bybelsche Historien by Pieter Schut from 1659. Since the size of the plaque is much larger than the print, the painter Adam Sijbel adjusted and enlarged the picture. On the print the man praying behind the sleeping shepherd is clearly visible, but only his head and hands can be seen on the plaque. The upright kneeling and praying shepherd in the middle is an addition by the painter and replaces the dog and goat in the center of the print. The biggest change is in the representation of the great company of the heavenly host. On the print only one angel is visible, but the painter added no less than twenty angels floating in the clouds, which gives an overwhelming effect.
On the reverse the name ‘I: Kok’ and the date ‘Ae 1770’ are painted in blue. The name does not refer to the painter, but most likely to the customer who ordered the plaque. On stylistic grounds this plaque can be attributed to the Amsterdam tile painter Adam Sijbel.

Similar examples
An Amsterdam plaque with the same biblical story and executed by the same painter is in the Musée National de Céramique in Sèvres near Paris and is depicted in Lahaussois (p. 278, nr. 332). This undated example is smaller in size (length 58 cm / 22.83 in., width 41 cm / 16.14 in.) and varies at certain points: the rim is straight and not scalloped and the painting is only done in blue and purple. However, the most important difference can be found in the execution of the sky with the descending angels, which is carried out in a simpler and non-spectacular way.

Explanatory note
Besides the mass production of tiles in the eighteenth century, tile factories in Amsterdam manufactured other items on a small scale such as plaques, trays, trivets and game-tiles. Also tea caddies, tobacco boxes, models of sleighs and shoes, and animal statues like cows, goats and dogs were made. Plaques form the largest part of this incidental production, and can clearly be distinguished from Delft examples stylistically and technically. Stylistically they are related more to tiles, tiles pictures and other items from Amsterdam, than to plaques from Delft. There are also important differences in production techniques. Delft plaques are molded in plaster molds and fired on pins in saggars. The plaques from Amsterdam were not fired in saggars, but standing on their side on two small clay cylinders between rows of tiles. The back of the plaques leaned against the tiles. This method of production leaves different marks on the plaques from the pin marks on Delft plaques and these are important keys to establish Delft from non-Delft production. Using molds enables a Delftware pottery to produce the same shape repeatedly, up to dozens or even hundreds of times, depending on how long the molds could be used. The Amsterdam plaques are all handmade and can therefore be considered as incidental products instead of items regularly produced.
Several names of painters who worked in tile factories in Amsterdam are known. Some of them monogrammed or signed their work. Adam Sijbel (1746-1803) worked at the Old Prince tile factory in the Anjeliersstraat from 1764 till 1784. In 1784 he moved to Makkum in the province of Friesland to work in the Kingma family pottery, which was established in the same year. The ten year contract he signed to work in the pottery in Makkum has been preserved (Pluis, p. 209, supplement I).
Sijbel monogrammed and signed several pieces. A pair of reclining cows in the Royal Museum of Art and History in Brussels is signed ‘A.Sybel’ and dated 1778. One year later, in 1779, he painted a tobacco box in polychrome and signed it ‘Adam Sybel’. Four items are monogrammed A.S.: a game-tile from 1764, a pair of serving trays from 1769, a biblical plaque from 1781 and an undated babouche.
The two serving trays from 1769, painted a year earlier than this plaque, are of special interest. The cut down tree trunk in the foreground of the plaque is also painted on the trays. Furthermore the execution of the foliage is the same. The bold twigs sticking out of the foliage is typical characteristic of the painter and can be seen on his work from his Amsterdam and Makkum periods.  For a overview of marked and unmarked pieces see our Pinterest page about Adam Sijbel.