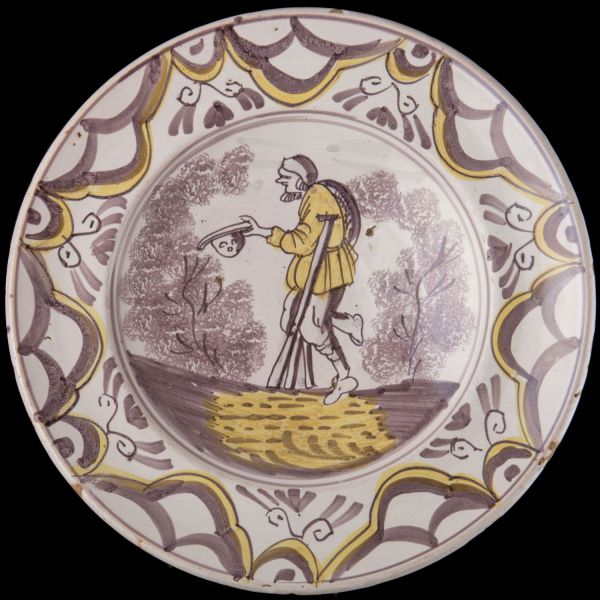 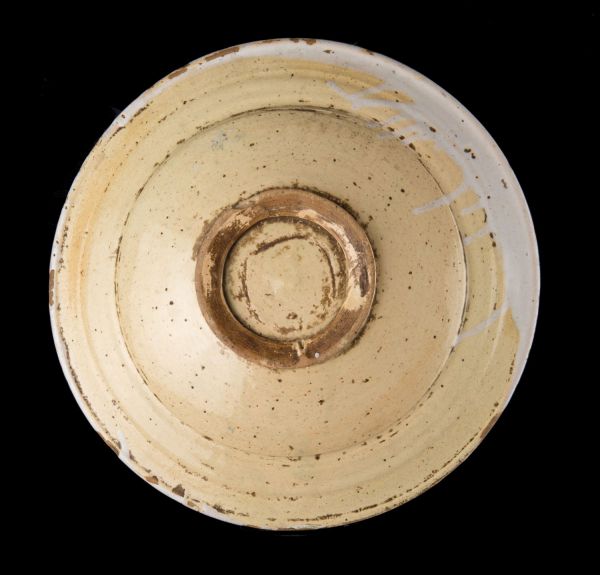 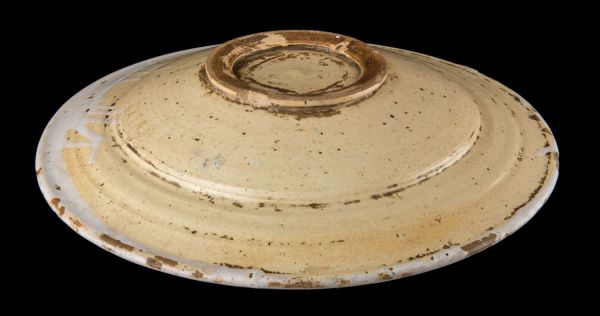 Purple and yellow charger with a beggar

The charger has a wide-spreading rim and is painted mainly in purple with some yellow accents. A beggar on crutches in simplified landscape is depicted in the centre. He holds his hat in his left hand and uses it as a begging cup. The leafage of the trees on both sides is sponged. The border is painted with arched segments and ox-head ornaments.

Similar examples
In the collection of the now disbanded private Harlinger Pottery Museum of Minze van den Akker were two purple and yellow variants attributed to Harlingen (Van den Akker, p. 114, nrs. 0117305 and 0117306). One of them shows a man walking and smoking pipe, the other a man carrying a basket on his head. Their borders are decorated in a similar way. A purple and yellow charger decorated with a flying putto holding flowers in his hand with a similar border decoration is in the Dutch Open Air Museum in Arnhem (Klijn, p. 170, inventory number NOM 23146-55). Another purple and yellow example is in the French Hotel Sandelin Museum in Saint-Omer, decorated with a putto between green sponged trees.

Explanatory note
Purple and yellow majolica chargers, sometimes with additional colouring in green and/or blue, with an arched-segment border were made in large quantities between 1675 and 1725. Variations in purple and green are also known. The design is always the same: a person, mammal or bird between sponged trees in a simplified landscape. The depicted persons are mainly hobos, vagabonds and drunks, but also include shepherds, putti and horsemen. Some chargers have an unpainted or sgraffito border. Smaller variants (circa 22 cm/8.66 in.) with animals or birds in a yellow or brown band also occur.