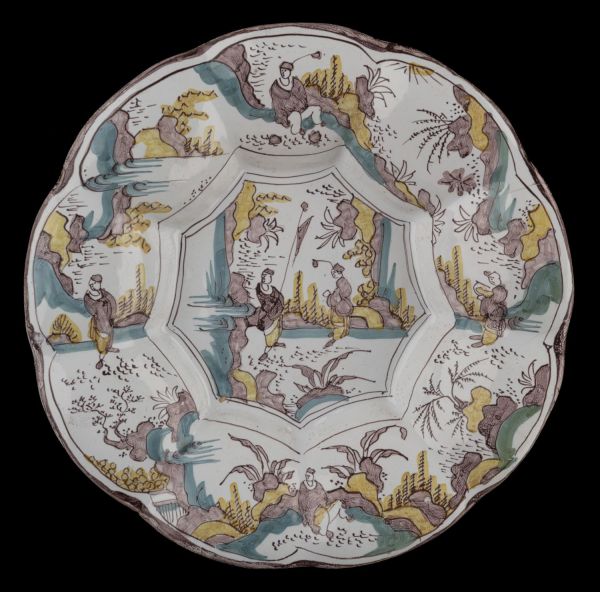 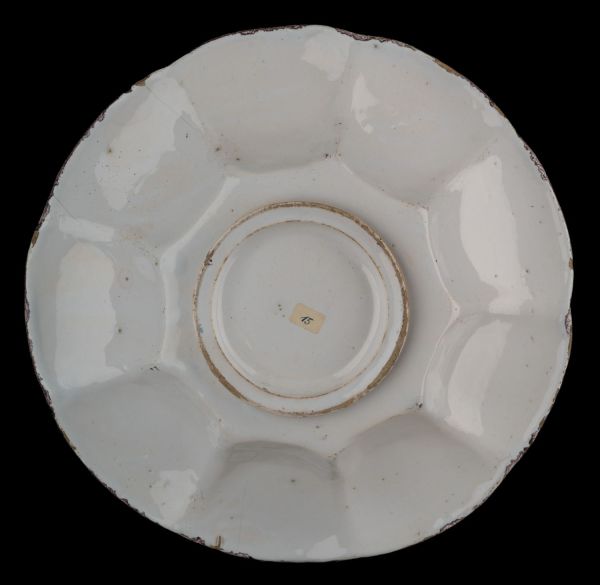 The lobed dish is composed of nine wide lobes around a nine-fold centre and is painted with a chinoiserie decor in purple, yellow and green. Two Chinese figures in an eastern landscape are depicted in the centre, one of them carries a banner. The landscape is framed within lines and a white band. The border is decorated with a continuous landscape with two reclining and two standing Chinese figures.

Similar examples
A lobed dish of the same shape and design in purple, blue and green is in the collection of the Victoria and Albert Museum in London (C.329-1930). The Museum of Fine Arts in Boston, Massachusetts holds a variant in blue and yellow. In the same museum are three lobed dishes, each with twenty-seven double lobes with chinoiserie landscapes in the same colour scheme of purple, yellow and green.

Explanatory note
In the second half of the seventeenth century many lobed dishes were painted with Chinese motifs, mostly landscapes with Chinese figures. The vast majority are in blue. Two- or multi-coloured chinoiserie decorations were very fashionable during a short period of time, predominantly in the 1680s. In addition to lobed dishes, they also appear on wine jugs, beer mugs, butter pots, covered spiced-wine bowls and dishes.
Some of this Delftware is still wrongly attributed to a factory in the German town of Frankfurt, and sometimes it is even considered to be English. An excavated chinoiserie butter pot in purple, green and yellow, found in a cesspit in the grounds of the Porcelain Bottle factory, proves otherwise (Eliëns, p. 109). A beer mug with the portrait of the Dutch prince Willem III, reserved on a chinoiserie landscape in purple, green and yellow, is a further indication of production in Delft. It is in the collection of the Princessehof Ceramics Museum in Leeuwarden, The Netherlands (Jongstra, p. 19).