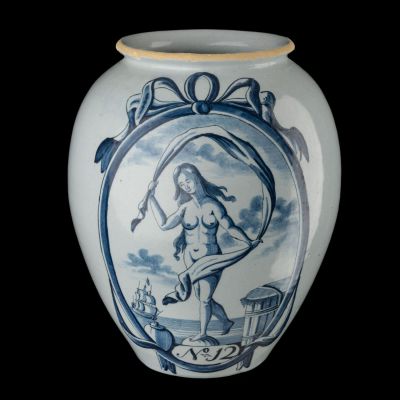 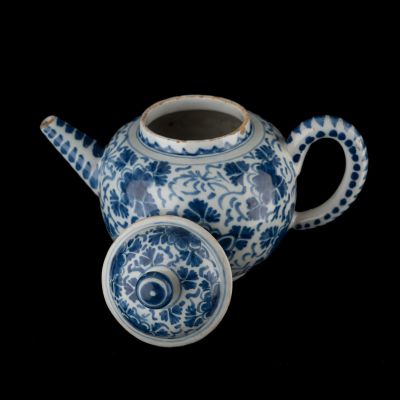 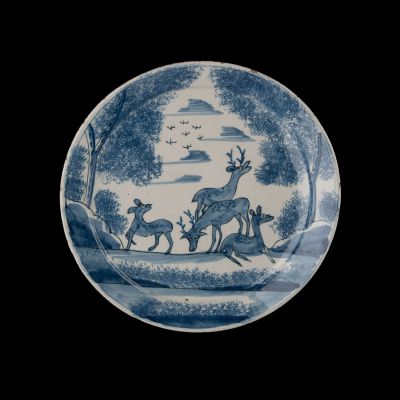 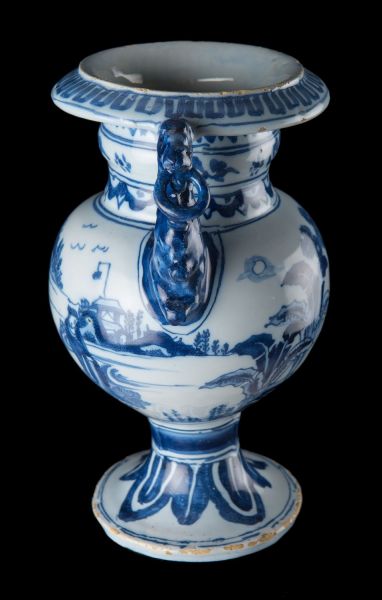 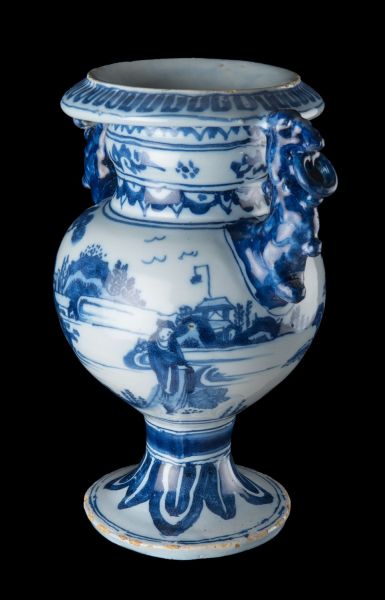 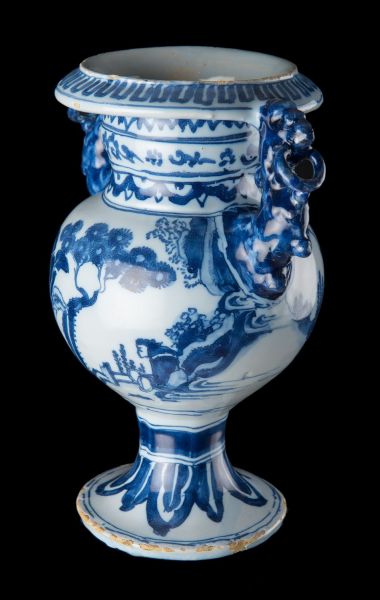 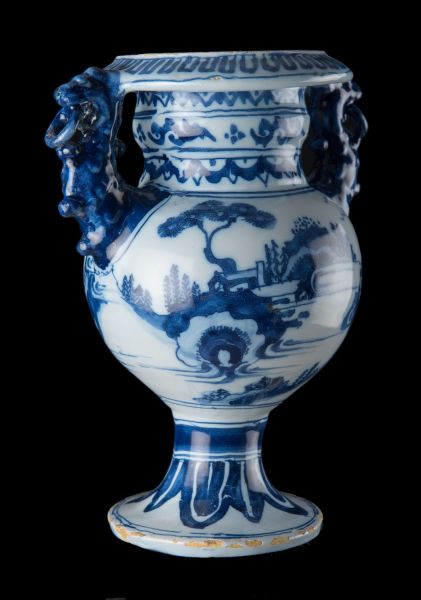 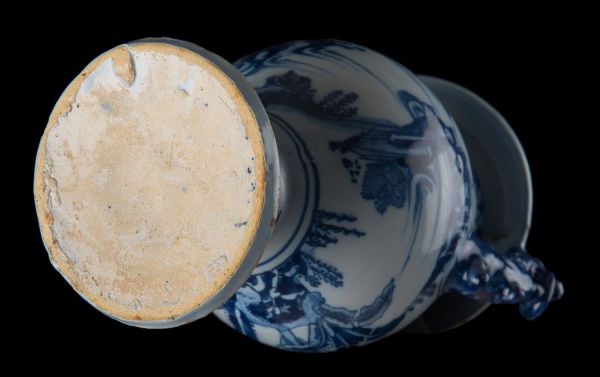 The ovoid altar vase stands on a high-waisted foot. The flaring cylindrical neck ends in an outward sloping mouth rim. The two blue coloured lion-shaped handles have suspending rings in their jaws. The body is painted with a continuous oriental landscape with banana and pine trees, Chinese figures and houses, while the neck is painted with three bands of different ornaments. The mouth rim is decorated with rectangular ornaments, the foot with leaves under a band around the ankle.

Similar examples
In the collection of the Kulturen museum in Lund in Sweden is an altar vase on a high bell-shaped foot, decorated with an oriental landscape (Kjellberg, p. 39). A pair of vases with Chinese figures in a landscape is known from the Greek A pottery in Delft (Aronson 2010, pp. 56-58.) and a similar unmarked pair was sold at Christie’s Amsterdam in 2001 (p. 105, lot 138).
Two late seventeenth century altar vases with the Catholic IHS monogram in a garland are in the collections of the Rijksmuseum Amsterdam (inventory number BK-NM-14208) and the Princessehof Ceramics Museum in Leeuwarden (inventory number NO 12466).

Explanatory note
Altar vases are also called vases à chimères. The oldest faience examples were made in the sixteen-twenties in Nevers, France and are attributed to the Conrade potters family, who originated from Italy. The shape is based on metal vases used during the services in Catholic churches. Therefore it is no wonder that many altar vases are painted with the Christogram IHS.
Altar vases were made in Delft from about 1675 onwards and production continued well into the eighteenth century. Marked examples are known from multiple manufacturers, such as The Greek A and The Moor’s Head potteries (Aronson 2011, pp. 14-15). A pair of eighteenth century vases was made between 1700 and 1716 at The Three Porcelain Ash Barrells pottery. They are marked with PK for the owner Pieter Kam or, after 1705, by his widow (Blazy & Boyazoglu 1983, p. 110). The pair is painted with a dense parsley decor.
A miniature example was excavated from a cesspit in the grounds of the former Porcelain Bottle pottery in Delft. At the same location a larger fragment was also found, decorated with a triple-tulip design in blue and yellow (Eliëns, Schledorn, Van Aken-Fehmers, pp. 31 , 36, 45). Three altar vases with similar tulip and flower decoration in blue and yellow are in the collection of the Dutch Open Air Museum in Arnhem and can also be attributed to the Porcelain Bottle pottery (Klein, p. 152).
Official Catholic services were not allowed in the seventeenth century in the Dutch republic, however Catholic conventicles were tolerated. At first sight it might be surprising that a Catholic object like an altar vase was made in a protestant country like The Netherlands. But, it shouldn’t be. These vases could very well have been made for export to Catholic areas such as France, German speaking countries and the Polish-Lithuanian commonwealth. In The Netherlands they may also have been commissioned for use in the Catholic conventicles.
Moreover, it is not certain that all of them were used as altar vases. The ones without a religious decoration could have been used as a vase for flowers or decoration in a private home.  However, the chance that such a vase was used in a protestant household is very small, since it would have been associated with Catholicism.