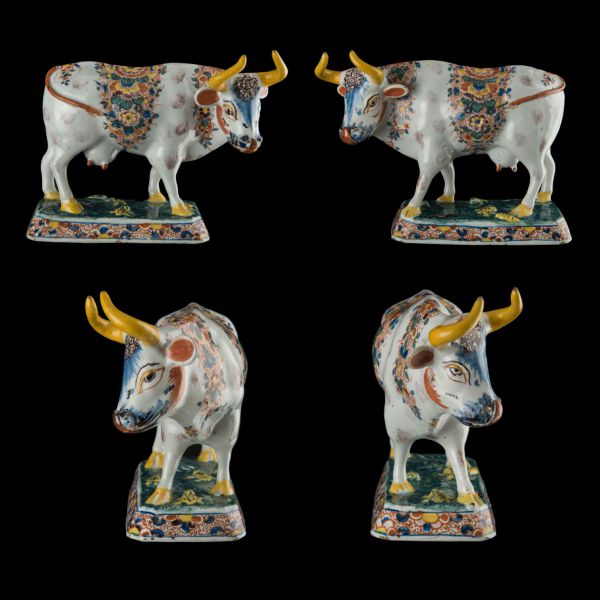 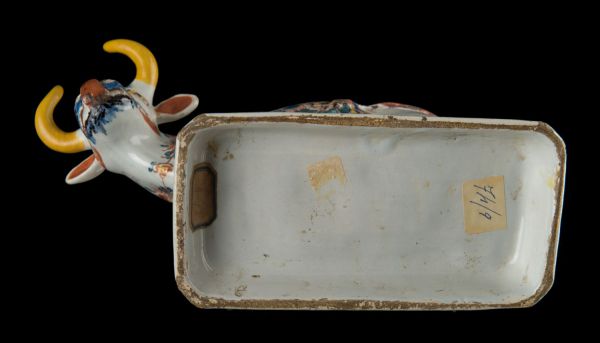 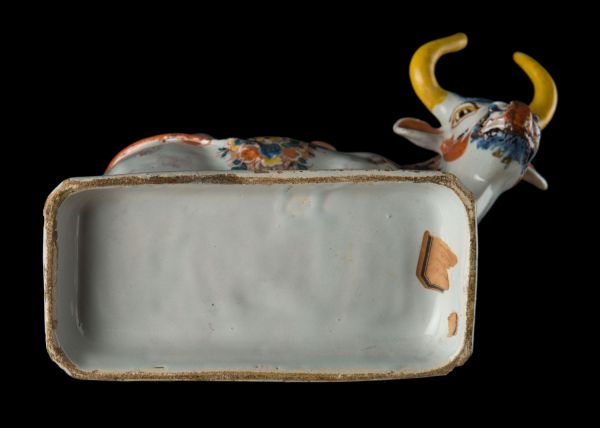 A pair of polychrome cows

The modelled cows with their heads turned to one side are placed on rectangular stands with chamfered corners. The animals are painted in polychrome. Their hides are dotted with purple spots, the hooves and long horns are executed in yellow. The necks and backs are decorated with abundant garlands of flowers. The cow’s expressive heads and muzzles are emphasized by the colours used. A snake is painted creeping in the grass between the cows legs, accompanied by three molded yellow frogs with green dots. The sides of the stands are decorated with demi-flowers on a white, iron-red dotted ground.

Similar examples
A pair of somewhat smaller cows of the same model and almost identical painting is in the collection of Baron Van Verschuer in Museum Arnhem (inventory numbers AB 4740 and 4742). Also in this collection is a pair of reclining cows with similar painting (inventory number AB 8999a-b). Both pairs were definitely made in the same Delftware pottery. For an overview of the Verschuer collection in Museum Arnhem, see Duysters 2015.

Explanatory note
Together with dogs, horses and parrots, cows are the most frequently modelled animals in eighteenth century Dutch Delftware. They were put on the market between 1740 and 1780 and were produced by nearly every Delftware pottery. Only two types are  known: a reclining cow and a standing cow. The latter could be made as a milking group, together with a farmer and his wife. The two types were executed in a great variety of form, dimension and colour combination. They can be monochrome white, blue and white, or polychrome. Some monochrome white models were cold-painted. Outside Delft, figures of cows were also made on a small scale in tile factories in Amsterdam.  The use of floral wreaths on cows or bulls harks back to a seventeenth century custom. Every year the butchers guild held a parade with the prize-winning cows and bulls, which were lavishly adorned with flowers and floral wreaths (Eliëns, p. 236).