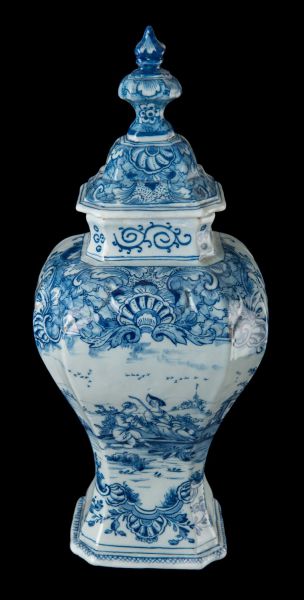 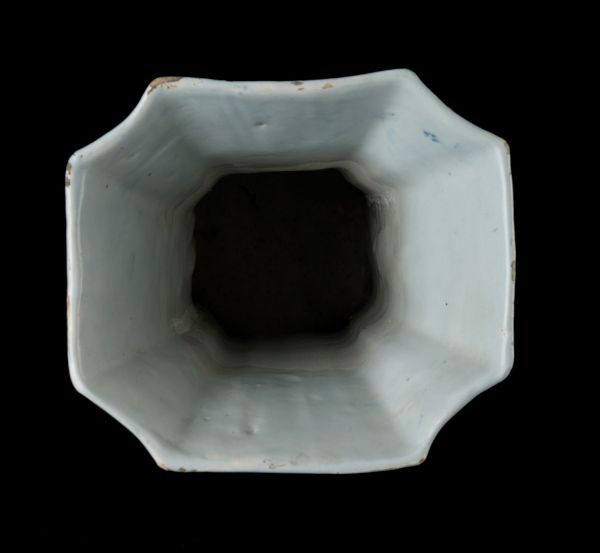 This garniture consists of a baluster jar with cover and two beaker vases of square shape with indented corners. The upper part of the jar and vases are modelled in relief with lappets and demi-circles. The cover has a baluster shaped knob. The garniture is painted in blue with shaped panels depicting shepherds in a landscape, framed by Régence style ornaments, flowers and foliage. The baluster shaped jar is painted around the neck with a scroll motif alternated with four circles at the corners. A floral sprig is painted on the back.

Similar examples
A five piece blue and white garniture with chinoiserie decorations with similar Régence style ornaments was auctioned at Christie’s Amsterdam in 2001 (p. 104, lot 435). In 2005 also at Christie’s a comparable garniture was sold, decorated with floral chinoiserie paintings in blue and white with some accents in green (p. 53, lot 122). This set too has Régence style ornaments.

Explanatory note
In the second half of the seventeenth century the custom arose of placing vases, bowls and other types of porcelain or Dutch delftware on top of cupboards and above fireplaces. Garnitures – a typically Dutch phenomenon – was developed out of this habit. It consists of a related set of covered jars, beaker vases and in some cases bottle vases, with the same decoration. The first garnitures were made in the 1690s (Eliëns, p. 144). They remained popular during the entire eightteenth century: garnitures belonged to the standard repertoire of nearly every Delftware pottery.